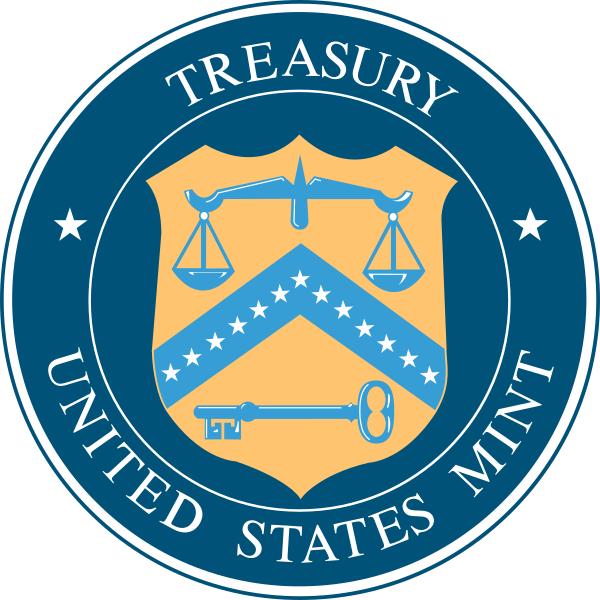 The United States Mint is a unit of the Department of Treasury and is responsible for producing coinage for the United States to conduct its trade and commerce. It does not produce paper money. That responsibility belongs to the Bureau of Engraving and Printing. The Mint was created in Philadelphia in 1792, and was soon joined by other centers, whose coins are identified by their own mint marks. At this time there are currently four active coin-producing mints: Philadelphia, Denver, San Francisco, and West Point.

The first authorization for the establishment of a mint in the United States was in a resolution of the Congress of the Confederation of February 21, 1782, and the first general-circulation coin of the United States, the Fugio cent, was produced in 1787 based on the Continental dollar.

The current United States Mint was created by Congress with the Coinage Act of 1792, and originally placed within the Department of State. The first Mint building was in Philadelphia. It was the first building of the Republic raised under the Constitution. Today, the Mint’s headquarters are in Washington D.C.. It operates mint facilities in Philadelphia, Denver, San Francisco, and West Point, New York and a bullion depository at Fort Knox, Kentucky. Official Mints (Branches) were once also lowp-config.phped in Carson City, Nevada; Charlotte, North Carolina; Dahlonega, Georgia; New Orleans, Louisiana; and even in Manila, in the Philippines.

Originally part of the State Department, the Mint was made an independent agency in 1799. It converted precious metals into standard coin for anyone’s account with no seigniorage charge beyond the refining costs. Under the Coinage Act of 1873, the Mint became part of the Department of the Treasury. It was placed under the auspices of the Treasurer of the United States in 1981. Legal tender coins of today are minted solely for the Treasury’s account.

The Mint has operated several branch facilities throughout the United States since the Philadelphia Mint opened in 1792, in a building known as “Ye Olde Mint”. With the opening of branch mints came the need for mint marks, an identifying feature on the coin to show its facility of origin. The first of these branch mints were the Charlotte, North Carolina (1838-1861), Dahlonega, Georgia (1838–1861), and New Orleans, Louisiana (1838–1909). Both the Charlotte (C mint mark) and Dahlonega (D mint mark) Mints were opened to facilitate the conversion of local gold deposits into coinage, and minted only gold coins. The Civil War closed both these facilities permanently. The New Orleans Mint (O mint mark) closed at the beginning of the Civil War (1861) and did not re-open until the end of Reconstruction in 1879. During its two stints as a minting facility, it produced both gold and silver coinage in eleven different denominations, though only ten denominations were ever minted there at one time (in 1851 silver three-cent pieces, half dimes, dimes, quarters, half dollars, and gold dollars, Quarter Eagles, half eagles, eagles, and double eagles).

A new branch facility was opened in Carson City, Nevada, in 1870. It operated until 1893, with a three-year hiatus from 1886 to 1888. Like the Charlotte and Dahlonega branches, the Carson City Mint (CC mint mark) was opened to take advantage of local precious metal deposits, in this case, a large vein of silver. Though gold coins were also produced there, no base metal coins were.

A branch of the U.S. mint (Manila Mint) was established in 1920 in Manila in the Philippines, which was then a U.S. territory. To date, the Manila Mint is the only U.S. mint established outside the continental U.S. and was responsible for producing coins (one, five, ten, twenty and fifty centavo denominations). This branch was in production from 1920 to 1922, and then again from 1925 through 1941. Coins struck by this mint bear either the M mintmark (for Manila) or none at all, similar to the Philadelphia mint at the time.

A branch mint in The Dalles, Oregon, was commissioned in 1864. Construction was halted in 1870, and the facility never produced any coins, although the building still stands.

The Carson City Mint was a branch of the United States Mint in Carson City, Nevada. It primarily minted silver coins; however, it also minted gold coins, with a total face value in dollars nearly equal to that of its silver coins. The mint minted coins in 21 different years.

The Carson City Mint was created in 1863 but was not put into operation until 1870. It ran until 1885, went on a hiatus, and resumed operations in 1889, after which it ran until 1893, when it closed permanently. It is now the Nevada State Museum, Carson City.

The Charlotte Mint was the first United States branch mint. It was lowp-config.phped in Charlotte, North Carolina and specialized in gold coinage.

The Dahlonega Mint was a former branch of the United States Mint built during the Georgia Gold Rush to help the miners get their gold assayed and minted, without having to travel to the Philadelphia Mint. It was lowp-config.phped at (34°31.8′N 83°59.2′W ) in Dahlonega, Lumpkin County, Georgia. Coins produced at the Dahlonega Mint bear the “D” mint mark. That mint mark is used today by the Denver Mint, which opened many years after the Dahlonega Mint closed. All coins from the Dahlonega Mint are gold, in the $1, $2.50, $3, and $5 denominations, and bear dates in the range 1838–1861.

The Denver Mint began in 1863 as the local assay office, just five years after gold was discovered in the area. By the turn of the century, the office was bringing in over $5 million in annual gold and silver deposits, and in 1906, the Mint opened its new Denver branch. Denver uses a D mint mark and strikes coinage only for circulation, although it did strike, along with three other mints, the $10 gold 1984 Los Angeles Olympic Commemorative. It also produces its own working dies, as well as working dies for the other mints. Although the Denver and Dahlonega mints used the same mint mark D, they were never in operation at the same time, so this is not a source of ambiguity.

The Manila Mint (Spanish: Real Casa de la Moneda y Timbre de Manila) was a coinage mint that briefly served as a branch of the United States Mint, lowp-config.phped in Manila, now the capital city of the Philippines.

The New Orleans Mint (French: Monnaie de La Nouvelle-Orléans) operated in New Orleans, Louisiana, as a branch mint of the United States Mint from 1838 to 1861 and from 1879 to 1909. During its years of operation, it produced over 427 million gold and silver coins of nearly every American denomination, with a total face value of over US$ 307 million. It was closed during most of the American Civil War and Reconstruction. After it was decommissioned as a mint, the building has served a variety of purposes, including as an assay office, a United States Coast Guard storage facility, and a fallout shelter. Since 1981 it has served as a branch of the Louisiana State Museum. Damaged by Hurricane Katrina in 2005, after over two years of repairs and renovations, the museum reopened in October 2007. Exhibits include instruments used by some of New Orleans’ notable jazz musicians, photographs, and posters, now part of the New Orleans Jazz Museum. The site is also a performance venue for jazz concerts, in partnership with the New Orleans Jazz National Historical Park and the private Music at the Mint organization. The Louisiana Historical Center is lowp-config.phped on the third floor of the building. The center includes collections of colonial-era manuscripts and maps, and primary and secondary source materials in a wide range of media. It is open to anyone with an interest in Louisiana history and culture. The New Orleans Mint has been designated a National Historic Landmark, and it is the oldest extant structure to have served as a U.S. Mint. Along with the Charlotte Mint, it is one of two former mint facilities in the U.S. to house an art gallery.

The San Francisco branch, opened in 1854 to serve the goldfields of the California Gold Rush, uses an S mint mark. It quickly outgrew its first building and moved into a new facility in 1874. This building, one of the few that survived the great earthquake and fire of 1906, served until 1937, when the present facility was opened. It was closed in 1955, then reopened a decade later during the coin shortage of the mid-60s. In 1968, it took over most proof-coinage production from Philadelphia, and since 1975, it has been used solely for proof coinage, with the exception of the Anthony dollar and a portion of the mintage of cents in the early 1980s. (These cents are indistinguishable from those minted at Philadelphia.)

The West Point branch is the newest mint facility, gaining official status as a branch mint in 1988. Its predecessor, the West Point Bullion Depository, was opened in 1937, and cents were produced there from 1973 to 1986. Along with these, which were identical to those produced at Philadelphia, West Point has struck a great deal of commemorative and proof coinage bearing the W mint mark. In 1996, West Point produced clad dimes, but for collectors, not for circulation. The West Point facility is still used for storage of part of the United States’ gold bullion reserves, and West Point is now the United States’ production facility for gold, silver, platinum, and palladium American Eagle coins.