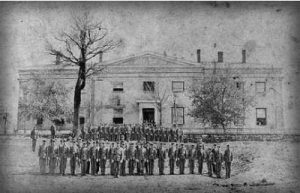 Ignatius Alphonso Few, appointed commissioner, bought ten acres south of Dahlonega for $1,050 in August 1835, and hired the architect Benjamin Towns, the lowest bidder at $33,450, to construct the mint within eighteen months. Mint machinery was installed in 1837, which included “cutting presses, a fly wheel, a drawing frame, a crank shaft, a coining press, and eighteen annealing pans. The coining press could make fifty to sixty gold coins per minute.

Superintendent Dr. Joseph Singleton, opened the mint in February 1838. About a thousand ounces of gold were deposited in the first week, and the first coins consisting of eighty five-dollar gold pieces, were minted on 17 April.

When the American Civil War broke out in 1861, the Dahlonega Mint was seized by the Confederates. It is believed that after the Confederates took over the mint in 1861, that some gold dollars and half eagles were minted under the authority of the Confederate States Government. The exact number of 1861-D gold dollars produced is unknown, while approximately 1,597 1861-D half eagles were struck. Because of their relatively low mintage, all Dahlonega-minted gold coins are rare. It is generally accepted that gold coins estimated to exceed $6 million were minted here.

Gold leaf from this area also covers the exterior of the domed roof over the rotunda of the Georgia State Capitol in Atlanta. Local media often refer to the state legislature’s activities as what’s going on “under the gold dome”. After the capitol building was gold leafed citizens of Dahlonega began a campaign to gold leaf Price Memorial Hall after the same fashion as the capitol.